Grainy Blues with Those Responsible 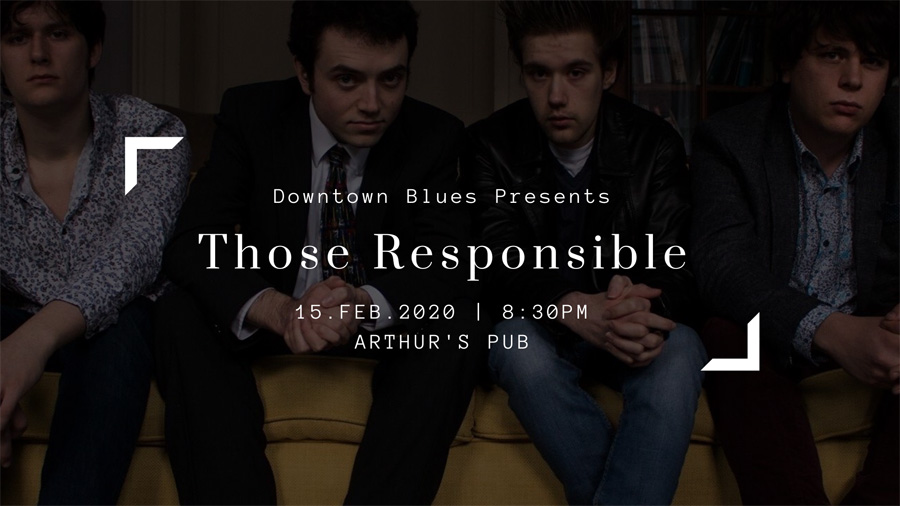 Those Responsible are the next generation of Irish Blues; playing shows across Ireland and the UK they have been blowing crowds out of the water with their classic four piece blues format - guitar and harmonicas layered over a solid and pulsating rhythm section.

Since forming they have gone from strength to strength holding down regular slots in Sweeneys, Whelans, Sin É and the Twisted Pepper.

In November 2014 Abner Brown’s Barbershop in Rathmines hosted a great gig for Those Responsible where they played a combination of blues standards and debuted their soon-to-be released single Esther. It was also the first time a band had performed an acapella ‘barbershop’ number via Curtis Mayfield’s “It’s Alright”. Abner Browns said ‘Bluesmen Those Responsible played a set that would have graced the coolest spots in New Orleans, blew the crowd away and played with a maturity way beyond their years!’

In the new year the band began independently recording, producing and mixing their debut single ‘Esther’ and released it in March 2015 to a packed out Cobalt Café. They went on Sky Channel - Irish TV playing and discussing the single.

In May 2015 Those Responsible also headlined the Jack of Diamonds stage of Canalaphonic festival, putting on a show that had the entire bar packed and hopping. There was only a small amount of jumping off amplifiers and guitar smashing. Jack of Diamonds described them as ‘One of Dublin’s most authentic, raw and energetic live acts! A throw back to the classic days of blues rock but an experience all their own!’

In Summer 2015 they went into Bow Lane Studios, working with Girl Band’s Daniel Fox and Jamie Hyland (The same duo who produced Girl Band’s debut album Holding Hands With Jamie) to record their self-titled debut EP. They played to a full capacity Whelans to release the EP in October with support from The Dead Sets and a number of special guests. They subsequently journeyed to The Roisín Dubh for their first gig in Galway in support of the EP.”